The real of woman, method and truth from the editors of Jineolojî — Habibe Eren/JINHA 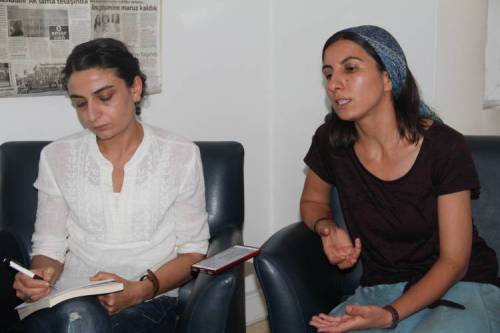 ANKARA – Jineolojî journal started its publication life by saying “The science to be developed around woman is the first step to the right sociology” and now its 2nd issue is out with the topic “Method and truth based on the real of woman”. The issue editors Elif Berk and Nesrin Onur told us why the search for truth is emphasized and why Jineolojî is necessary.

Jineolojî, which means the science of woman and life; is in fact a criticism developed against today’s understanding of social science. Being subjected to androcentrism in science like all other fields reveals the necessity of jineolojî. While the journal’s first issue had the topic “The Crisis of Social Science and Jineolojî”, the second issue out in June 15 takes up the topic “Method and truth based on the real of woman”. And the journal’s cover photograph’s from Zehra Doğan, the JINHA reporter who did journalism in Nusaybin for months. The cover features a wish tree adorned with a colorful keychain on the tree. This multicolored tree that tries to open the door of truth is also based on the real of woman. We talked about Jineolojî, a journal debated intensely by world’s woman’s movements who found it important, by the issue editors Elif Berk and Nesrin Onur.

— The journal started its first issue by the special topic “The Crisis of Social Science and Jineolojî”. Why were social sciences necessary, what was traversed until reaching the journal’s second issue?

Elif: Jineolojî revealed its raison d’être by a need for a new social science. It’s social science, because we think of no reality of a science that we can define outside of social science. A fallacious approach to the society, a fallacious approach to sociality also brings a fallacious approach to the sciences. In this sense, we think social science cannot procure an ascend without directing a powerful criticism in itself, or without metabolising [yaşamsallaştırmadan] the criticisms, without dealing with their reflections in all other fields. When the revolutionary character of the 21st century is kept in sight, in view of a women’s force who has the aim to construct a new system, we think that it’s of course indispensable and that’s why we chose such a topic. From that point of view, the second issue investigated the topic of method and truth based on the reality of woman. There is a serious problematic of method. There is a problem in its approach to events and facts, people, nature, and this is a problem of method to be solved. When we ask ‘Why does a person need knowledge?’ we can give an answer like ‘she needs it to meet her truth, to free herself’.

‘Jineolojî is a progressive point for woman’

Nesrin: The priority is a need to construct a new science focused on woman’s freedom and this science shouldn’t be in the monopoly of some people. Especially not in the monopoly of men or certain classes, but of the oppressed; the priority is a need for women to be pioneers. Our aim is to construct a woman’s science, to touch and transform and reach all women, to find solutions according to their states of oppression. Jineolojî is a branch of science that refers itself to this need. The priority is women but it’s the construction of a new science focused on woman. This is a progressive point both for the society and for woman’s freedom.

— How is the journal issued, what are the topic headings in the second issue, who are among its writers and how do the women approach the journal?

Nesrin: Both in the publication committee and the consultation committee of the journal there are pioneering women. There are friends both from the world and from Turkey. Jineolojî journal is not a journal that’s merely published by Kurdish women, you know. In fact it’s a discussion platform; we try to explain jineolojî in view of different ideas. For instance, over woman’s issues and social issues for which feminism cannot produce solutions, we investigate in view of solving the social problems. So our journal’s in fact a discussion platform. A platform that receives contributions by the articles and discussions by women of different opinions. From Afghanistan, from Italy, to Middle-east, many activist women write in the journal.

‘Jineolojî was something we needed’

Elif: To publish a journal like Jineolojî journal was in fact something we needed ourselves. Because we’ve been discussing jineolojî on a variety of platforms for several years. We’ve also been striving to institutionalize it. [*] What we need as women is to construct our own freedom. To be able to form togetherness and a collective ground. Patriarchal system goes with modernity to push humankind into individualism and monism. In face of this marginalization and narrowing down, the step to take no doubt aims to unite against the narrowness. The development, institutionalization, socialization of jineolojî will be a channel by itself.

‘One needs to form the strife’s own theory’

— Jineolojî started with a wager for a woman’s science by including woman and life. It’s too fresh as a journal but it’s debated much in the world’s woman’s movements. How are the responses and the criticism that you receive?

Elif: We are maybe fresh as a journal. Maybe jineolojî is new as a concept but in regards to its content, if we look at the origin, in fact we deal with a ground with deep roots. The novelty of the concept and the freshness of the journal shouldn’t take precedence over this ground. In fact we’re freshly starting to run a discussion about how to turn this into a force of transformation.

Nesrin: 40 years’ experience of Kurds’ strife for freedom, again Kurdish woman’s strife for freedom… In fact this work’s based on years of accumulation. We can also see it like… We can read it as the time to form the political theory of a strife that’s been going on for years. This strife needs to form its own theory. Just as there is a need for new life, so too is there a need for a new science. Just as the new life organizes itself, so too the new life needs to organize the new science. In addition to positive responses, there are also those who cannot settle in their minds and ask why there should be a need for jineolojî when we have feminism. In fact such questions also give occasion to fruitful discussions. They cause us to progress as a journal.

— What kind of footnote would you add for someone who has bought the journal for the first time? What will she find in this issue of Jineolojî?

Elif: During 3 months’ time, we witnessed that it has an aspect that generates great enthusiasm and wonder among women and among men. There were people that we never expected, never hoped for, who contacted and requested the journal. And we’re not limiting this interest with women, there is quite an interest from men too. This is in fact a starting point to see why jineolojî emerges as a need. The current system imprisons women to such a degree, women are shown to be so desperate that we experience that we cannot breathe. And maybe why we cannot breathe originates from our inability to precisely tell towards which truth to breathe based on what. The second issue will contribute to this effort, there are very valuable articles for a woman to understand her reality, for her to clarify the search for a method in this sense. This issue has developed as being shaped more heavily on what jineolojî thinks about its own point of view and what women think. In fact the greatest cause for us to emphasize truth is to concretize women’s revolutionary force and to construct woman’s revolution.

Nesrin: The question of method is very important in that this was an issue that revealed both the method of jineolojî as the science being proposed to reach woman’s truth, and also the journal’s own method. Recently the measure of science is constrained into academia and theory is almost incomprehensible. It does not address everyone. It’s drifting to a track where its own addressees cannot even comprehend it properly. In fact we have to break this monopoly.

Jineolojî journal’s 3rd issue about “Jineolojî and Woman’s Revolution” is expected to be published in September.

[*] t.n. For “mücadele etmek”, I say “striving” instead of the usual “struggling”, because the English word “struggle” frequently refers to an inconsequential strife.

One response to “The real of woman, method and truth from the editors of Jineolojî — Habibe Eren/JINHA”